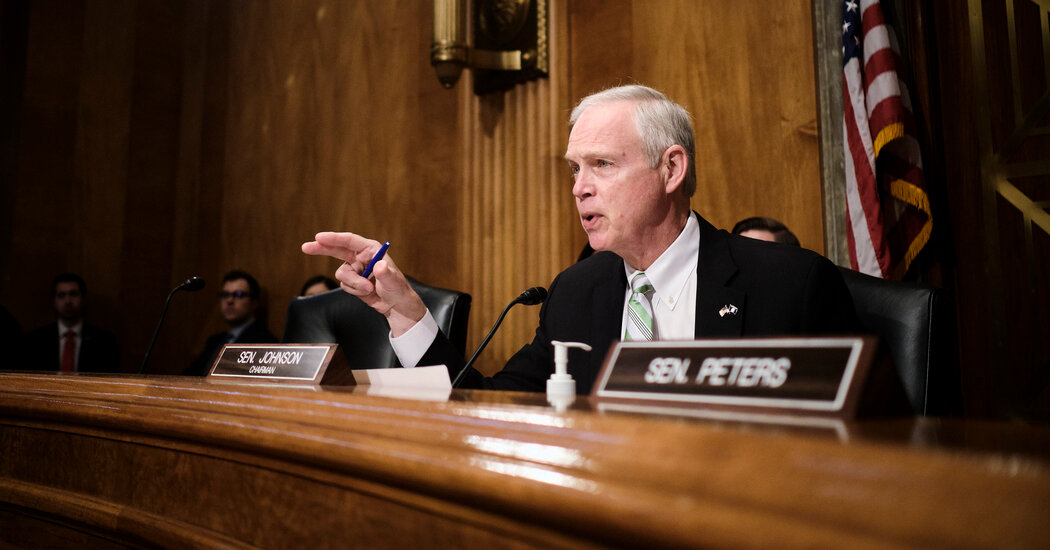 Sign up for On Politics to get the latest election and politics news and insights.

WASHINGTON — An election-year investigation by Senate Republicans into corruption allegations against Joseph R. Biden Jr. and his son, Hunter, involving Ukraine found no evidence of improper influence or wrongdoing by the former vice president, closing out an inquiry its leaders had hoped would tarnish the Democratic presidential nominee.

The investigation found that Hunter Biden had “cashed in” on his father’s name to close lucrative business deals around the world. It also concluded that his work for Burisma Holdings, a Ukrainian energy company then mired in a corruption scandal, while the former vice president was directing American policy toward Kyiv had given the appearance of a conflict of interest and alarmed some State Department officials.

But an 87-page report summing up the findings, released jointly on Wednesday by the Senate Homeland Security and Finance Committees, contained no evidence that the elder Mr. Biden improperly manipulated American policy toward Ukraine or committed any other misdeed. In fact, investigators heard witness testimony that rebutted those charges.

The homeland security panel’s Republican chairman, Senator Ron Johnson of Wisconsin, had made little secret of his political ambitions for his report, boasting for weeks that his findings would demonstrate Mr. Biden’s “unfitness for office.” Instead, the result delivered on Wednesday appeared to be little more than a rehashing six weeks before Election Day of unproven allegations that echo an active Russian disinformation campaign and have been pushed by Mr. Trump.

The report’s primary conclusions, though, were largely the ones Mr. Johnson and his investigative partner, Senator Charles E. Grassley, Republican of Iowa, had made before they began their work, with some new details from State Department and financial transaction reports.

Hunter Biden’s position “hindered the efforts of dedicated career-service individuals who were fighting for anticorruption measures in Ukraine,” the Republicans wrote. They did not clarify the nature of that hindrance beyond saying that the situation had been “awkward” for career State Department officials, who “were required to maintain situational awareness of Hunter Biden’s association with Burisma.”

It was also filled with details that emphasized the unseemly appearance created by the younger Mr. Biden’s involvement with Burisma, given his father’s position. Section 8 of the report was entitled “HUNTER BIDEN: A SECRET SERVICE PROTECTEE WHILE ON BURISMA’S BOARD.”

“What the chairmen discovered during the course of this investigation is that the Obama administration knew that Hunter Biden’s position on Burisma’s board was problematic and did interfere in the efficient execution of policy with respect to Ukraine,” the report said.

The Trump campaign quickly promoted the “explosive new revelations,” zeroing in on financial records obtained by the senators that showed Hunter Biden receiving large sums of money — sometimes as large as seven figures — from foreigners in China, Russia and elsewhere while his father was in office. They amounted to “stunning levels of corruption and breathtaking breaches of America’s national security,” said Tim Murtaugh, a campaign spokesman.

In their own competing document challenging the report, Democrats accused Republicans of cherry-picking their findings. All 10 witnesses interviewed by investigators, they noted, had testified that neither Mr. Biden nor anyone else had altered American policy because of his son.

The lack of meaningful new information and the overlap with a Russian disinformation campaign that American intelligence officials have said is designed to denigrate Mr. Biden only fed charges by Democrats and Mr. Biden’s campaign that Mr. Johnson had abused his Senate powers to aid Mr. Trump’s re-election campaign — and in so doing, had aided Moscow.

Andrew Bates, a spokesman for Mr. Biden’s campaign, accused Mr. Johnson of subsidizing “a foreign attack against the sovereignty of our elections with taxpayer dollars” by promulgating “a long-disproven, hard-core right wing conspiracy theory” about the former vice president.

Mr. Biden has conceded that the optics of Hunter Biden’s position were bad, but the former vice president has repeatedly denied any wrongdoing.

Though their scope was ultimately broader, Republicans set out to scrutinize a specific claim raised by Mr. Trump: that Mr. Biden had corruptly pushed for the ouster of Ukraine’s top prosecutor, who had been investigating Burisma, as a favor to his son. Mr. Trump’s pursuit of that charge, including the pressure he tried to put on Ukraine’s leader to look into it, is what prompted his impeachment last year.

The senators turned up no evidence to support it. Current and former government officials testified that the decision to remove the prosecutor had not been merely Mr. Biden’s position, but that of most Western nations determined through a rigorous policy process.

The report’s lead finding — that Hunter Biden’s presence on the Burisma board posed a challenge for American diplomats — rested heavily on the testimony of George P. Kent, a State Department official involved in Ukraine policy. Mr. Kent raised concerns in 2015 and 2016, including with Mr. Biden’s staff, that the millions of dollars in payments to Hunter Biden by Burisma made it “very awkward for all U.S. officials pushing an anticorruption agenda in Ukraine.”

But Mr. Kent’s statements are not new. He had a prominent role in the House’s impeachment inquiry last fall, when he detailed his concerns about Hunter Biden, but also said he “did not witness any efforts by any U.S. official to shield Burisma from scrutiny.”

“So there was no time, as I’ve testified, that the U.S. government, the U.S. Embassy ever made a decision” about the owner of Burisma or the firm itself “where we took the presence of a private citizen on the board into account,” he told Mr. Johnson’s staff. Other former diplomats, including the ambassador to Ukraine at the time, made similar statements.

Neither Mr. Biden’s campaign nor Mr. Johnson would say whether he had sought information directly from the former vice president, and a lawyer for Hunter Biden did not respond to a request for comment.

In an interview last week before the report’s release, Mr. Johnson said he was simply conducting the type of oversight with which his committee was tasked, and suggested that the investigation had been thrust upon him because Mr. Biden had opted to challenge Mr. Trump. The senator said that he “never thought Joe Biden should run for president,” and hinted that the former vice president had cognitive problems, a baseless attack frequently hurled by Mr. Trump.

Senate Democrats had sought to shut down the inquiry, noting that it was based on claims that Russia has fanned about Mr. Biden and Ukraine.

Senator Chuck Schumer of New York, the minority leader, noted during one such attempt last week that the United States had just imposed sanctions for election interference on a Ukrainian lawmaker with ties to Russian intelligence, Andriy Derkach, who was peddling edited tapes purporting to show improper acts by Mr. Biden in Ukraine. The tapes were part of a “a covert influence campaign,” the Treasury Department said this month, bent on “spurring corruption investigations in both Ukraine and the United States designed to culminate prior to Election Day” — like the one Mr. Johnson conducted.

Mr. Derkach claimed that he had provided information to Mr. Johnson and Mr. Grassley, though the senators said they never sought or received anything from him. (They have worked with Andrii Telizhenko, another Ukrainian, despite law enforcement officials sharing concerns with the committee that he, too, could be spreading the same Russian misinformation.)

On Wednesday, Mr. Schumer said the report read “as if Putin wrote it, not United States senators.”

Mr. Johnson forcefully denied that his report was based on any disinformation. But he also said a claim should not be off limits merely because bad actors were amplifying it.

“If there is somebody in Ukraine and somebody in Russia also publicizing the fact that Joe Biden and Hunter Biden created this massive conflict of interest,” Mr. Johnson said, “is that something we are just supposed to take a hands-off attitude toward?”

Democrats were not the only ones taking issue. Last week, Senator Mitt Romney of Utah, the 2012 Republican presidential nominee, criticized Mr. Johnson for pursuing what he called a “political exercise.”

“It’s not the legitimate role of government for Congress or for taxpayer expense to be used in an effort to damage political opponents,” Mr. Romney said.

Doctors Are Calling It Quits Under Stress of the Coronavirus

Inside eBay’s Cockroach Cult: The Ghastly Story of a Stalking Scandal